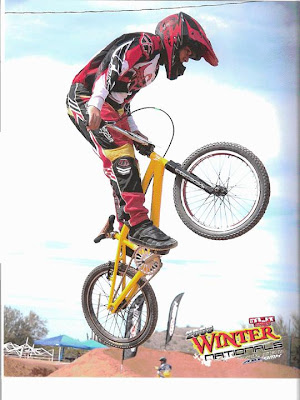 Jorge Martinez
one of are new factory riders sporten his new frame and jersey.

Psykopath Team hits ABA Phoenix in style. The trip got off to a great start with local boys Kevin Zondervan who was fresh out of EMT class, Jesse Langland our resident A-Pro on the road, and TM Nick Dawg even snagged another local Allen Porter who was hungry to make some noise in the new 41 and over X class. A quick stop at the local Red Bull HQ and the crew would have no problem knocking out the 11 hour drive down into the desert. Valencia would take the long drive in stride and think about the turnout that would be there including many heavy hitters in the ultra tough 19-27X class which he would share the task of getting into the main event with Kevin this weekend. It was one of Kevins first of hopefully many trips with the road crew/team and he fit well. Nick and Kevin had their work cut out for them, but maybe a little bit easy of a task compared to Jesse Langland who would be banging bars with none other than the complete podium from the Beijing Games as Strombergs/Mike Day/ and DR would all be in the house to make every A pro who was looking for a UCI point work as hard as possible to get it. Jesse started off with a rough Friday pre race but showed signs that the weekend could only get better. Nick and Kevin took the friday to scope out practice and rest for a very long UCI Saturday. Red Bull had an event going on that Jesse and Kevin attended with some pro wakeboarders in town for a contest so those guys went out and hit the night life as Nick and Porter layed low and plotted out the weekends race at hand.

Jesse looked good in the UCI rounds all day long but with such a deep deep pool of talent the quarters were elusive this time around as Jesse would just miss the cut but showed signs that Sundays typical A pro program should suit him well. He took tons of experience from the laps with some of the best in the sport and here at Psykopath we like to stand behind our single A's that go head to head with Olympians and show that they can be the next big thing, so god job Jesse keep up the first straight work and things can and will fall into place. Jesse wouldn't let a bum day at the track slow him down as he bolted home and showered up for a rave? Haha the heckling began but Jesse was off to party it up and trance it with some of the weirder people in the state of AZ. Haha might have stayed out a little too late though, as Sunday morning brought a first round fall that would start him off with an 8 in the low points chase. 8-4-1 was 13 points and left Jesse just outside of advancing to the next round of qualifying. Mike Redman caught wind of the rave talk and had dubbed Jesse "Night Crawler" for the rest of the weekend, always fun and Redman showed him some love to offset a close points cut. Jesse is looking for that UCI point still so he can represent Psykopath at the UCI Worlds in Australia and we fully intend on backing him to make that happen so watch for him at ABA Texas in 2 weeks!

Valencia and Zondervan were looking good in motos with a few 2nd round wins and shots into the quarters. Kevin is always improving and should be looking to go deeper in a talented class as the year goes on but this weekend was a bit much as he fell short of the main event but liek Langland got a good glimpse of what he needs to do to make it in the class. Valencia on the other hand is still working through a bummed knee but has also shown glimpses of what he can do when things are dialed in. A crash in the Saturday quarter left him on the outside so he would miss the transfer there but come back hard on Sunday and eventually survive the quarters and semis to take a 5th in a very tough main. That should help him move up in the current NAG standings for 19-27X and he has a little bit of momentum going into a busy month where he will be at NBL Nellis this weekend and ABA Texas the following weekend. Look for the team to always be hanging out in the pits at your nearest national and we always want to congratulate our riders on the way to factory level as this weekend the Martinez Family took down some good scores and even a win or two while in phoenix! Pics to be posted soon as the camera has been acting up as of late- Over and out see ya at NBL Nellis...
Posted by nickdawg at 12:26 PM